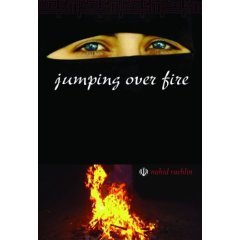 “This poignant, beautifully told story of an Iranian-American family is both a great read and a fine introduction to a land and a culture about which it is imperative we Americans inform ourselves as much and as quickly as possible.”— Sigrid Nunez, author of The Last of Her Kind and For Rouenna.

“In this new novel, Nahid Rachlin's powers as a writer and storyteller blaze at their fullest, like the Norooz (New Year's) bonfires that the title alludes to. In an era when fear of Middle Eastern terrorism holds the West in thrall . . . it is refreshing to encounter a genuine and truly multicultural voice, able to speak both from within Persian culture and the American society in which Rachlin now lives and writes. Jumping Over Fire presents the sort of nuanced voice that must be heard if Iranians and Americans are ever to understand one another.” — Carolyne Wright, author of Seasons of Mangoes and Brainfire (Blue Lynx Prize, American Book Award)

“Nahid Rachlin's narrative weaves Iran's recent tumultuous history with more universal human experiences to create a powerful story of love, politics, and migration.”— Persis M. Karim, editor of Let Me Tell You Where I've Been: New Writing by Women of the Iranian Diaspora

“An exploration of cultures and cultural differences; of taboos real and imagined; of belonging and isolation — informative, fascinating, beautifully written and, perhaps most important of all — fun to read!” — Tama Janowitz, author of Peyton Amberg: A Novel and The Slaves of New York

“Jumping Over Fire is a wise and passionate novel about the vast cultural divide, and how it can lead to divided hearts.” — Hilma Wolitzer, author of Hearts, Tunnel of Love, and The Company of Writers